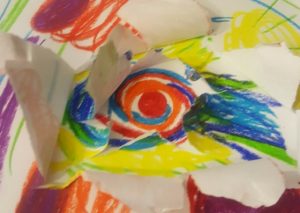 Last night I had an instinct to do an art therapy process after huge week of facilitating one on one sessions, a couple of wellbeing workshops and a collaborative process at TEDx. It was a great reminder to just go with it and see what insights come, its not like what to do is mapped out, it evolves and informs as you go.

I won’t bore you with all the intricate details but thought it might be useful (considering I can’t share my clients processes) to give you an idea of how a process can assist with self-reflection, exploring, expressing and transforming.

I chose an oil pastel and as I put it to paper the spiralling expanded from the centre, another colour doing the same until there were four different coloured spirals all coming from the middle of the page. It became apparent that these were symbolic of stories that get amplified and may not be that useful – expect for the yellow, that was about expansion. These spirals needed to be ‘capped’ so that they could be put back in their place and as that was drawn on the page different marks were made on the page to represent ongoing development.

Now this is where the actions in an art process can come to the fore – as the spirals were now blocked I had an instinct that the pressure was building and something was about to be revealed as they exploded the page and revealed something underneath (in reality I ripped the page open!). I knew straight away that the shapes and colours on the now blank centre would be significant and as a blue flame revealed itself other colours were added to bring forward even more meaning. It didn’t feel complete yet, with another layer needing to be revealed. Another layer ripped open to reveal an evolving shape that contained purpose, life, balance, reassurance and an essence that I need to listen to. To consolidate the revelations, I journaled with the art and the message was one that I need to take notice of and implement in my life.

When you look at this picture, it’s no masterpiece (it doesn’t have to be) and may not make a lot of sense to you. But to the creator it is about how the shapes, lines, colours, actions inform. This art broke through the layers so that they goodness hidden deep can come to the surface and be seen, felt, heard and integrated. No art therapy process is the same, it is about being present to the process and interacting so that the information can come. This left me feeling like something has shifted and that I can step into life with some of the old stories being put back in their place.

If you feel like it would be useful to explore some of your life, please don’t hesitate to be in touch, I love sharing space for you to discover what you are looking for.