The story that gives me goose bumps… 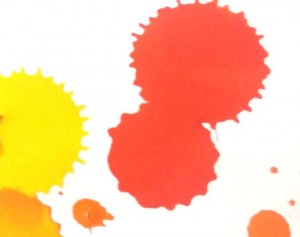 This week I did a talk at the University of Adelaide on art therapy and I got tingles all over telling one particular story. I was just talking away and bam! I was consumed by the moment with shivers over my body with my breath being taken away.

It is one of those stories that totally shows why I am so passionate about what I do as well as demonstrating how the process of expression in art therapy is beyond anything that you can describe.

Lets call this guy Jack. He was about 16 years old and didn’t really like school and took absolute pleasure in wagging classes, being disruptive and the thing he loved most of all was getting a reaction out of people when he was being defiant with his silence was deafening.

Lets just say he didn’t really fit in at school and was a little lost but was super intelligent and really didn’t see the point in the way school was structured.

Really what was happening was he was mighty pissed off with the world –some things that had happened earlier in his life weren’t ideal and some resentment had built up – his behaviour certainly demonstrated this but he was a troubled soul that needed a safe space to work out what was happening for him.

At the time I was a fairly new counsellor and this moment was certainly a defining one where I knew that there was something incredibly important in using creativity to express what was happening.

I asked him to draw his anger…

he looked over at me with a slightly suspicious glint in his eye and said ‘do you need these textas?’

I replied unsure of what was about to happen, that he could do what he needed to do.

Jack sat in silence for a second or two and I could see this internal ‘do I, or dont I ‘ type convo happening inside his head.

Next minute, something clicked and he trusted himself to go for it.

He leaned forward grabbed a marker, snapped it with extreme vigour and then spent time smearing the sponge from inside the texta all over the page.

It was all over his hands, all over the page and he flicked the ink all over the page, it was like the anger was pouring out of his finger tips. The violence of it was written all over him, his face, his breath, his eyes, the sounds he was making, his skin, his actions, his energy and the force behind every movement. It was definitely something that couldn’t be put into words and he had just found a way to describe what it felt like for him.

But it didn’t stop there. There was a couple more textas that were sacrificed as they interacted with the red that was on the page. I won’t go into anymore detail as that is Jacks private process but lets just say it went from dark heavy violence to something being shifted, all within the safety of the page. Yep, the art can take some pretty full on stuff and this was no exception. I reckon its much better than actually punching walls, people or acting out in other ways that are not productive to healing and moving through life.

The look in Jacks eyes after doing this process is something I will never forget. He was a little freaked out that he just let it all out – it was like he needed some time to process and let what he just ‘spoke’ about be absorbed. He had never talked about his frustration with life in such a way and it was certainly something very very powerful.

This was about 12 years ago and if I knew then what I know now (training as an art therapist) this process would have been expanded even more and I am pretty sure Jack would have resonated with this type of therapy. He couldn’t talk about what was happening, instead he would act out in his behaviour and this avenue could give him the ‘voice’ that he needed, if you know what I mean.

I am grateful that this was a pivotal moment in my life as a therapist and hope that Jack is doing ok, wherever he is, whatever he is doing, I don’t think he would realise what that meant that day for me and all of my clients that have benefited since – this is an amazing way to express beyond words.

We have some exciting things to help you explore and let go of those things from the past that are hanging around like a monster on your shoulders. Lets send some time unpacking the things that are holding you back from leading a confident, vibrant, happy a free life that you want. We will be having a bonfire night as well as some exciting online programs ans it would be awesome to have you join us. To get all the details just sign up here http://eepurl.com/brjZjn

Til our paths cross again, take care of you